This documentation describes the process that took place between 2020 and 2022 of collecting and digitising object data from Nigerian institutions, recording oral tradition, and preparing the Benin Kingdom map and a text on Itan Ẹdo. This process was designed by Osaisonor Godfrey Ekhator-Obogie and Eiloghosa Obobaifo, members of the Digital Benin research team from Benin City, to clearly show an Edo-centric rather than European or US American approach to create a digital platform documenting the historical Benin objects currently translocated globally or residing in Nigerian institutions. The first stage of documentation in Nigeria was to identify stations of the National Commission for Museum and Monuments (NCMM) across the country that hold historical Benin objects in their collections within the scope of the project (for more details on this, see ‘Object Research and Review’).

Three stations were identified and visited by Osaisonor Godfrey Ekhator-Obogie and Eiloghosa Obobaifo. At the National Museum Benin, the catalogue cards of all their collections which had not been digitised were photographed, and the curator made available an inventory of the collection. The process took about a week with the support of the museum staff. Other NCMM stations visited were the national museums in Owo and Lagos.

A visit to National Museum Owo revealed that there was little to nothing in their collection that falls within the scope of the Digital Benin project. The logbook and a few inventory records at the museum have objects related to the social relations between Benin and Owo – mainly female body ornaments like ivory bracelets. At National Museum Lagos, over forty thousand catalogue cards had to be sorted, which involved all the storekeepers of the museum with the cooperation of the curator, Mrs Adeboye. The process of finding the catalogue cards for the historical Benin objects and photographing each card involved an immense amount of work. But it was also extremely significant, as the NCMM had not previously digitised these cards or created a digital database for their collections. Therefore, Digital Benin was digitising this information for the first time to connect it with other museum data on the platform. At this stage, the NCMM acted as a collaborator in the project and gave us their full support with material and a team of dedicated staff (Read more about the digitisation process and connecting the data in Digitisation in NCMM Benin, Owo, Lagos).

The fieldwork was devoted to a search for and collection of a multiplicity of voices and views from contributors in Benin City and environs. Some of the places visited were unknown to the researchers, who are experienced field researchers in and around Benin City. Collecting oral histories among the Benin people required extensive preparation and planning. This was one step to explore the rich cultural heritage that has existed for over a thousand years.

The first and most important task was to identify contributors who were considered established and knowledgeable in their field of expertise. A list of potential contributors was prepared which indicated their background experience, titles and designations, location and assigned or expected topic for the oral-tradition documentation. Some were to narrate historical accounts of specific subjects and perform songs to document oral traditions that are culturally and historically significant. Some prospective contributors turned down our request for an interview. The oral histories and traditions passed down from one generation to another were documented in multiple media. As a means of societal documentation and preservation of its revered cultural traditions, the Benin people tell their stories with both songs and narration, in addition to other forms of artistic expression carefully coded in daily rituals. Therefore, the fieldwork was conducted as qualitative research, including participant observation, interviews, field-note journaling and preparing for the written consent of all contributors following ethical guidelines.

During the fieldwork, the researcher created an interactive atmosphere by asking open-ended questions, which enabled the contributors to narrate historical accounts and describe cultural traditions without structural limitations. The researcher intermittently asked leading questions based on the responses of the contributors. In most cases, the contributors were not interrupted and the conversation flowed freely, though guidance might have been given before the interview commenced. There were instances of participant observation in the field, like visiting the bronze-casters foundry every day for over two weeks to document, learn and speak to the contributors. During these visits, the processes of bronze casting were filmed continually to ascertain the uniqueness and consistency of each stage of the lost-wax procedure – cire perdue.

Some other guilds contributed insights that were likely unknown to many scholars; many descendants of the present generation of the Benin people were not even aware of the knowledge shared by these practitioners. There were also guilds that could not be contacted or interviewed owing to the research team’s inability to secure the collaboration of the royal court (no letter of consent was received). Most guilds directly serve the Ọba, and only an official directive from the monarch would have made it possible to interview them. The use of extant literature and oral traditions from non-guild members filled what would have been a monumental vacuum. It is also imperative to note that the Edo State Government was contacted but did not respond with a letter of intent, which presented another challenge in accessing relevant archival documents. The researchers had to get through a lot of bureaucratic bottlenecks to gain access to government archives.

During this fieldwork, accounts of historical events that are stylistically documented in art and re-enacted in cultural ceremonies were collected to explain the cultural significance of Benin objects to the Benin people. In addition to recounting historical traditions, some cultural activities of the Benin people were described as the living culture that was being documented in the fieldwork. Therefore, the fieldwork comprised both the observation of significant ritual practices and the collection of descriptions of cultural activities as part of Benin life from resourceful contributors in Benin City and environs. In doing this, there were seldom documentation restrictions based on the principle of secrecy among the people. But when there were restrictions, the researcher was able to navigate the terrain with the appropriate respect to the ritual practices. It is at such moments that the researcher’s background knowledge of the society as well as familiarity with the people was especially helpful.

Contacting all the proposed contributors had its own difficulties. Some places were visited on several occasions to secure an audience for an interview. This process involved repeatedly introducing the project and the researchers and explaining the purpose of the visit. All contributors were visited and contacted via phone calls at least three times. Individual contributors completed a consent form which gives Digital Benin the right to use and include the fieldwork material on the digital platform. Some elderly contributors opted out of the video interview and granted only the use of their voice recording on the platform.

Simultaneously, the Itan Edo was developed as a description of the historical and cultural traditions of the Benin people based on a literature review and in reference to two organograms (Plankensteiner, 2007, p.92[17]; Eweka, 1992, p.25[182]; Igbafe, 1979, p.32[185]) that were reworked into one as a model for the hierarchical digital presentation chosen for the platform. Below is the organogram that developed and from which a more elaborate and detailed hierarchical nesting presentation of all entities that are reduced in this organogram.  ​ 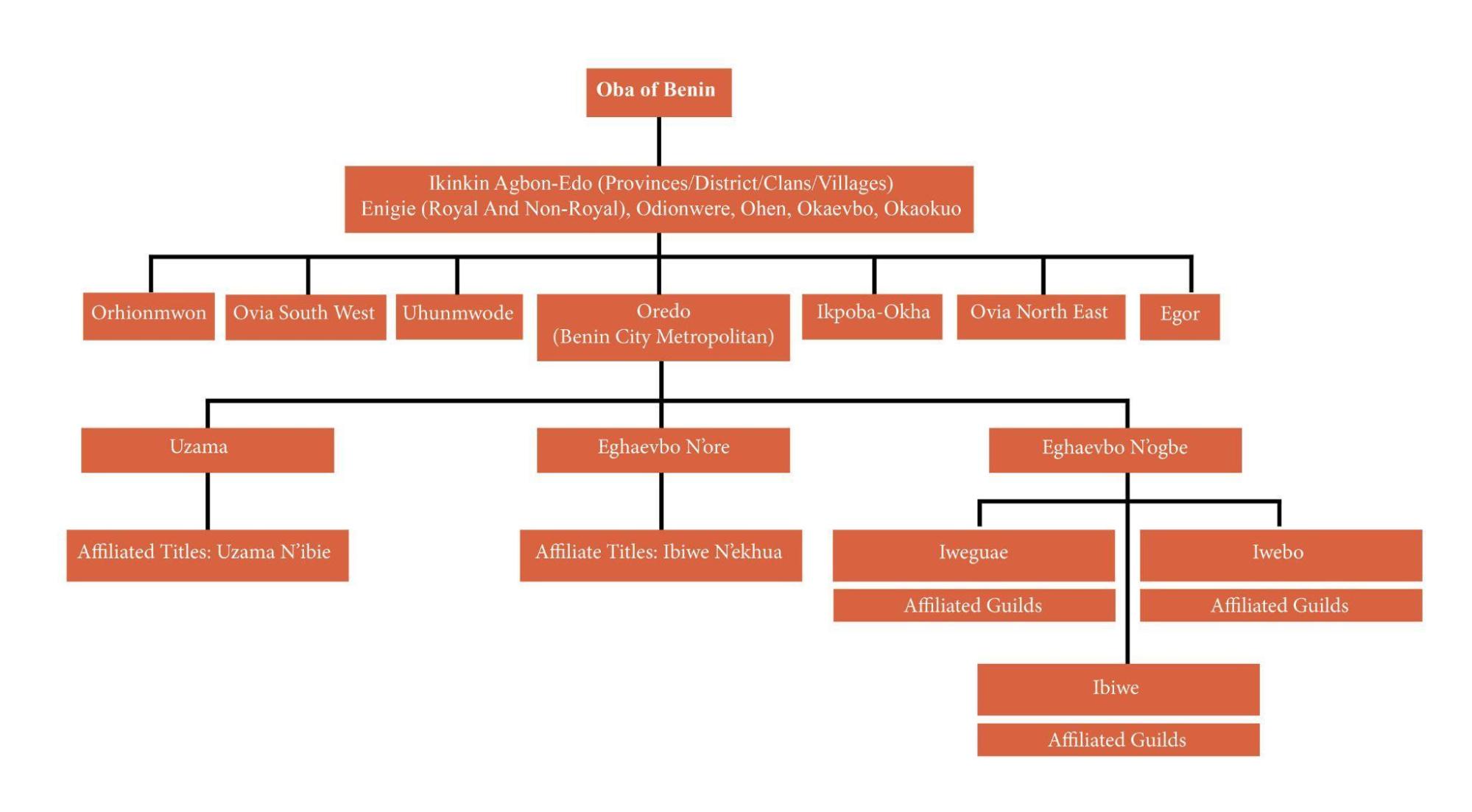 The content of the Itan Edo was developed far beyond this organogram structure. The research was brought into a software tool that would allow a direct linking of the entities described in the Itan Edo. The organogram structure, which was more of an overview than a detailed hierarchy, was the first prototype for an interactive display on the site for the content produced. However, we quickly realised that contextualising the Kingdom of Benin involved far more complexity and research than what was displayed on the organogram, and we developed a second iteration based on a combination of the organogram, an anthology, a glossary and a map. Neither of these is interactive, however, so nested navigation gave us the most flexibility to represent the research content hierarchically and with links. The organogram also helped communicate to the technical development team how the links and nested navigation are related to the hierarchies in the Kingdom of Benin. While making this outline, the focus was to bring texts from Benin writers and scholars, who in our view hold an Edo perspective of Benin history and culture, into a structure that is interactive for users of the platform.

The first draft of the research for the Itan Edo was reviewed by African and European scholars including Prof. Mrs Kokunre A. Agbontaen-Eghafona, Prof. Dr. Barbara Plankensteiner, Prof. Felicity Bordenstein and Dr. Uyilawa Usuanlele. One outcome of the review process was the decision to develop three groupings for prominent women in the Kingdom of Benin to represent their respective role, history and influence, namely the queens (Iloi), queen mothers (Iy’Ọba) and prominent women. The content was organised with the digital publishing medium in mind – an interactive website that shows the historical content in nested chapters. The Itan Edo content was prepared with the assistance of a research assistant, Mabel O. Oviahon. The first draft was reviewed by Dr. Uyilawa Usuanlele and Prof. Victor Osaro Edo. All comments and suggestions were considered and given the necessary attention by Osaisonor Godfrey Ekhator-Obogie. The Edo language used in the body text was carefully reviewed by Mr. Aiko Obobaifo and Prof. Mrs Esohe Omoregbe, both of whom also reviewed the Edo language orthography.

The Itan Edo is significant for creating the pedestal upon which oral traditions were documented and geographical locations identified on the map – in addition to the fact that the historical overview was developed to situate different objects in the cultural perspective of the Benin people. Although concise, the Itan Edo had to be designed to enable the connection between people and places and the different objects, including their material and usage.

Back to documentation page