Osaisonor Godfrey Ekhator-Obogie gathered, documented and evaluated pertinent collection information in Nigerian museums and designed and executed research relating to the historical works of art in Benin City and the Edo-speaking region. He recorded oral traditions and local knowledge in his essential role in the project. He set up research methodologies which included the determined and informed establishment of partnerships with stakeholders in Nigeria. His field research included the respectful inclusion of contributions from his long-standing relationships in Benin City in his role as researcher that he brought to the project. The contributions of oral histories and traditions were accompanied by repeated introductions of the project and digital context as well as hours spent in the field with participants to conduct research, consultations and conversations prior to the video and audio documentation. He advised the research of the platform at large under the guidance of Prof. Kokunre Agbontaen at the University of Benin and the project catalyst Anne Luther. He also coordinated and supervised the research and work of project researcher Eiloghosa Obobaifo and assistant researcher Mabel Osaruemwinnomwan Oviahon. He contributed a bibliography of Edo scholars and authors from his time as a research fellow at the Institute for Benin Studies – presently he is secretary to the executive council of the institute – and established the platform’s research spaces ‘Itan Edo’ and ‘Oral History’. 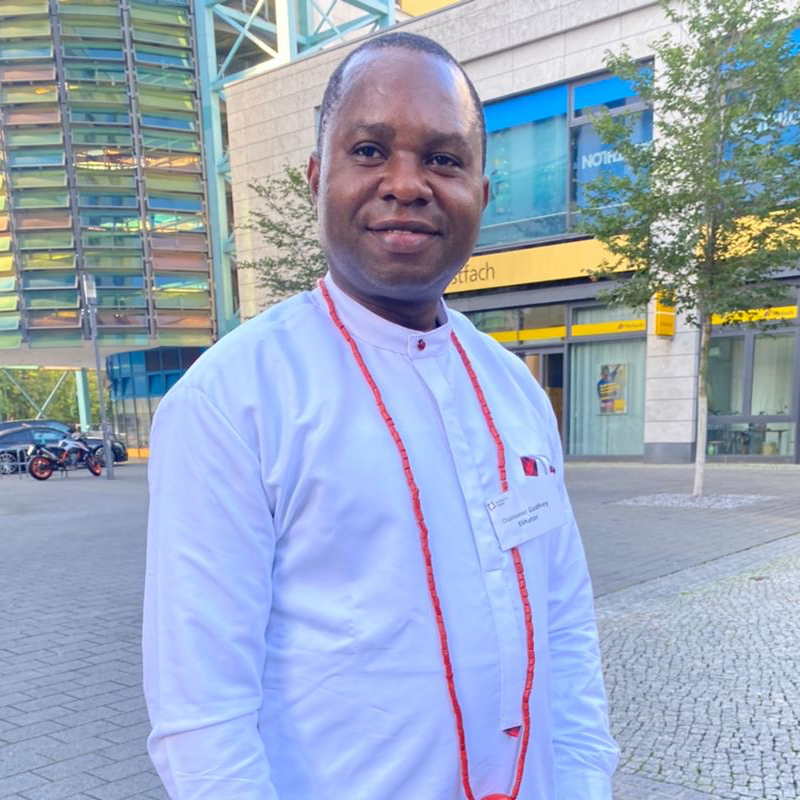 Osaisonor Godfrey Ekhator-Obogie is a Research Fellow at the Institute for Benin Studies, presently the Secretary to the Executive Council of the Institute. He is a Fellow of the French Institute for Research in Africa, Nigeria (IFRA-NIGERIA) and a member of Lagos Studies Association (LSA). He serves as tour guide for visitors to the historical/heritage sites of the Ancient Benin Kingdom and has developed a flair for the promotion of the history, cultural tradition and language of Benin/Edo speaking people. His on-going PhD research is focused on the cultural history of Benin people/kingdom. His research interests are Ethnicity and Nationalism, Migration and Citizenship, Cultural History in general and Benin Studies in particular. Ekhator-Obogie graduated from Adeyemi College of Education, Ondo with a Bachelor's Degree in Arts and Education (History). He holds an M.A. in History from the Ibadan School of History in Nigeria’s premier University of Ibadan. He has also attended and read papers at academic conferences and workshops.

2017. “Akobie: An Aspect of Childhood Ritual, Indigenous Education and Socialisation in Benin Kingdom,” Umewaen: Journal of Benin and Edoid Studies 2 (1).

2018. “Usukporhu: Defending the Oba and His Harem,” The Benin Monarchy: An Anthology of Benin History.